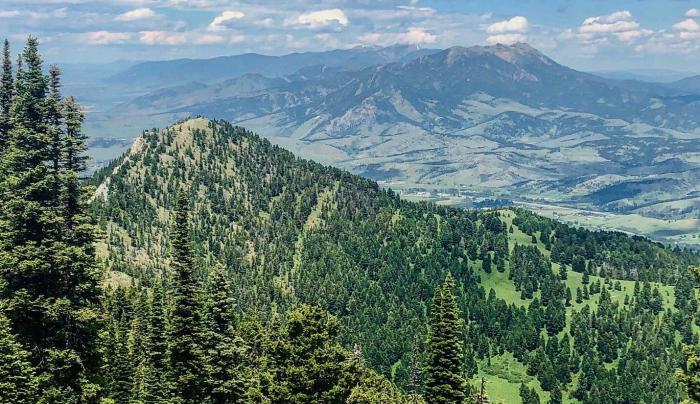 Amidst all the summer fun we hope you're having, take a minute to get caught up with this week's skim of Montana business news below.

Often lauded as one of the state’s major business success stories, owners of a prominent Montana farm have sold their land. Wheat Montana, based in Three Forks, sold its mills and bakeries to a private equity firm in 2015 and sold its farm to a new family in January 2019, co-owner Dean Folkvord said. Though his family still has a small share of ownership in the company, it isn’t significant, and he said it’s time for the family to move on and focus on other projects. Now, Dean said his family wants to focus on its properties in the hospitality industry. A year ago, the Folkvord family opened the revamped RSVP Motel in Bozeman, which is primarily owned and managed by Dean and Hope’s daughters, Haylee and Hillary Folkvord. The family also owns the Travelodge and the Sacajawea Hotel in Three Forks. Although they will miss Wheat Montana, looking into new projects is also a possibility, Hope said. [Bozeman Daily Chronicle]

Submittable (hiring), a company that created a submission review and opportunity marketplace platform, announced last week that it has raised $10 million in venture capital investment, one of the largest Series B investment rounds in state history. The round was led by Next Coast Ventures, a venture capital firm based in Austin, Texas. According to CEO Michael Fitzgerald, “We plan to hire seven people a month for the next 24 months.” Fitzgerald said the goal is to pay wages at his company that are two-and-a-half times the annual median wage in Missoula of around $51,000 for a single person. The company has about 90 employees right now, and Fitzgerald said the goal is to get to 240 in Missoula over the next two years. He added that 99% of the company’s revenue comes from out of state and that 10% of employees are first-time homebuyers in Missoula. According to Fitzgerald, about 90% of the new hires will be technical developers, but the company will also hire marketing, data analysis, sales and entry-level jobs. Additionally, the company is in the process of opening an in-house daycare in the Florence Building for employees, and they’ll hire two daycare positions soon. Jolene Brink, the marketplace development manager for Submittable, said it’s one of the 10 largest Series B rounds in Montana history. “With this Series B funding, we join other Montana-based companies like SiteOne (Bozeman), Onxmaps (hiring) (Missoula and Bozeman), Blackmore (hiring) (Bozeman), RightNow/Oracle (hiring) (Bozeman), and MeatEater (hiring) (Bozeman) who are proving the massive growth potential that exists for startups in our home state,” she said. [Missoulian]

Businesses have increasingly embraced messaging platforms as a means of connecting with customers — the idea being that people who use such channels to chat with friends will likely use the channels to liaise with companies. Bozeman-based Quiq (hiring), like others in the space, is setting out to capitalize on this growing push toward messaging in customer service. Quiq announced recently that it has raised $12.5 million in a series B round of funding led by Foundry Group, with participation from Teamworthy Ventures, Venrock, and Next Frontier Capital. Quiq had raised $6.5 million in a series A round of funding in 2016, and with its fresh cash influx it plans to build out its platform to “make it smarter” through AI and bots that “deliver the next generation of conversational commerce,” according to a statement. The company also plans to introduce what it calls the “first messaging-based shopping cart.” [Venture Beat]

Plastered all over the news last week was the story of an Iranian drone taken down by the United States in the Persian Gulf after coming within 1000 yards of a Navy vessel. The drone was brought down by the LMADIS, a drone-thwarting technology developed by Belgrade company Ascent Vision Technologies (hiring). LMADIS or “light marine air defense integrated system” has been in use by the U.S. Department of Defense for 18 months. Ascent Vision Technologies’ (AVT) system disrupts unmanned vehicles that are operated by what the company calls “bad actors.” In an uncertain world, moving the front lines of technology forward might be the key. AVT Vice President Stephen Zinda says the operation in the Strait of Hormuz was the biggest use of their technology that’s been released to the public. [ABCFox Montana]

Prospera Business Network (hiring) recently received money to form a Food and Agriculture Development Center for Park and Gallatin counties, the first program of its kind in the region. To launch the center, the state Department of Agriculture gave Prospera approximately $60,000 for the next two years. The money will go toward creating a business support system for companies that make products using Montana food and agriculture materials. It will also help bolster services Prospera already offers, including business counseling, specialized professional trainings, business loans and financing, business development grants and economic research. [Bozeman Chronicle]

The Big Sky Community Organization recently broke ground on a $20 million community center, complete with a climbing wall, ice rink and park. The center — named BASE, an acronym for Big Adventures, Safe Environment — will sit in the center of Big Sky at the corner of Aspen Leaf and Simkins drives. Work on the 3.3-acre property will begin July 27. Over the remainder of the summer, utilities will be relocated and updated. Building construction will then start in April 2020 and is scheduled to be completed by June 2021. Big Sky residents have been working to build a community center for a decade to address the lack of indoor public space in the town. Although residents have long wanted the project, it is only recently that sufficient funds were raised to allow the project to go forward. [Bozeman Chronicle]

ROI Solutions, a call center with offices in west Billings, will begin managing customer service operations for the national meal-kit delivery service HelloFresh. The new contract between HelloFresh and ROI Solutions — along with a pair of smaller contracts ROI landed earlier this month — means the call center will need to hire between 150 and 200 new employees in Billings by year's end. ROI, a Utah-based company that expanded to Montana earlier this year, is setting up shop in Billings. [Billings Gazette]

An electric scooter company recently hit the streets of Bozeman. Called Blink Rides, the locally owned business offers about 100 scooters to the public across town. Owner Lana Kitto said she wants to help alleviate parking problems and help people better explore the city. “We do have a mobility problem,” Kitto said. “We want to be more than just a joy ride.” Kitto said she got the idea to set up shop in Bozeman after riding an e-scooter at a conference in San Diego. When she got back, she said she contacted several larger e-scooter companies to franchise here, but Montana wasn’t an appealing location for them because of its snowy winters. Ride-sharing scooter companies are a trend across the country. Because they’re so new, cities have had to grapple with how to handle them, and have decided to disallow them altogether in some cases. A city panel in Missoula recently voted on Wednesday to block electronic scooter or dockless e-bike companies in Missoula for at least another year, if not longer, the Missoulian reported. [Bozeman Chronicle]

Montana State University (hiring) has been named one of the top universities where students are most likely to land jobs after graduation. The career guidance site Zippia ranked colleges and universities across the country. Zippia reports an 89 percent job placement rate for MSU alumni. MSU officials said this success comes from investing in students in their first year. [KTVH]

The Home Builders Association of Great Falls (HBAGF) was recently recognized by the Great Falls Public School Board for their work and support with students and programs in the community including their investment into programs such as Grizz Biz/Ram Enterprises, a middle school program that allows students to experience the business world from inside and out. "That program is so unique. It's not just a shop class," HBAGF Executive Officer Katie Hanning said. "They have a board of directors and those kids hire and fire themselves and they make money. They have to work so many hours, have to know about products and work with customers and online orders. Even if that kid doesn't do construction, he understands basic entrepreneurship and what it takes to do business." [Great Falls Tribune]

Montana hospitals lead the state in wages and jobs, according to a study released this week. The Bureau of Business and Economic Research study showed Montana hospitals employed more than 24,500 people in 2017. Those jobs came with larger paychecks than what’s typical in Montana. The average private sector wage in Montana is $40,981. For hospitals, that number is $61,444. “Health care in general, and hospitals in particular, are at the heart of every regional economy in Montana,” said Patrick Barkey, director of the Bureau of Business and Economic Research. Boiled down, Montana hospitals created the second largest number of jobs in the state and came out on top for total annual wages out of 84 sectors. The ripple from the business of hospitals led to nearly 61,000 private sector jobs economy-wide. Montana’s hospitals are responsible for almost $10 billion in total output — $4.7 billion in gross domestic product and $5.9 billion in value funneled into Montana’s economy. [Bozeman Chronicle]

The Big Sky School District (hiring) in Gallatin County, Montana, is building affordable housing for teachers in an effort to keep them from leaving their jobs. The district has broken ground on housing that it is constructing in partnership with Habitat for Humanity. Superintendent Dustin Shipman says that the high cost of housing is a key reason that teachers are not remaining in the area. He estimates that teacher turnover is between 5% and 8% a year. Shipman adds that higher housing rates in the resort area that encompasses the district have turned potential hires away in the past. David Magistrelli, executive director for Habitat for Humanity of Gallatin Valley, says the goal is to have teachers pay rents that are about 30 percent of their monthly income. The two buildings under construction will accommodate 12 residents and is forecasted to be ready by fall. [American and School University]

LumenAd’s Founder and CEO, Ryan Hansen, recently spoke to Innovate Montana about growing a company from the ground up in Montana. In 2014, LumenAd (hiring) started as a digital marketing services company managing complex, multi-channel advertising campaigns for mid-market businesses. In 2018, LumenAd transitioned from selling managed services to building and managing an operating system to manage complex online campaigns end-to-end. Today, LumenAd now employs 62 people, and continues to grow with offices in Missoula & Bozeman, Montana, and Austin, Texas. Between their Bozeman and Missoula offices they’ve received approximately $300k from the Big Sky Economic Development Trust Fund. That funding has allowed LumenAd to invest in great employees - and the faster they can hire, the faster they can grow. Hansen identifies three key advantages for growing LumenAd in Montana: a common get stuff done personality trait, a solid life-work balance, and an overhead structure that allowed them to start working with smaller companies and move upwards. [Innovate Montana]