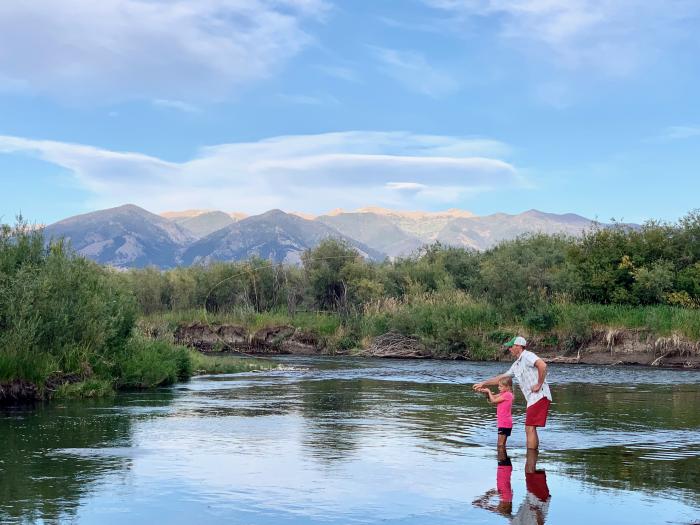 As you gear up to (hopefully) unplug a bit over Labor Day weekend and spend some quality time outside on the trails, rivers or lakes with friends and family...get caught up with this week's skim of Montana business news below. #fishingfamily #teachemyoung #shecaughtarainbow #eastgallatin

Tim Sheehy is a combat-wounded veteran who returned home with a vision. "After my tours overseas, I recognized there was a need for enhanced aerials supervision capability to be applied to the public safety sector," said Sheehy, CEO of Bridger Aerospace and Ascent Vision Technologies. "Whether that’s border security, whether that’s law enforcement, or whether that’s wildfire mitigation." Bridger Aerospace provides advanced aerial fire fighting services in Montana and across the country. They assist the Forest Service and other agencies year round in wildfire response and suppression. The company started in 2014 with one plane and two people. Today they have twenty planes and more than 100 people working for the company. Housed under the same roof is Ascent Vision Technologies, which specializes in the manufacturing of gyro-stabilized camera systems. Bridger Aerospace and Ascent Vision Technologies provide the area with high paying, high-tech jobs. Many of the people that work here are either veterans or graduates of Montana State University. "It’s incredible that our footprint here in Bozeman, Montana is making and helping the, not only military customers, but commercial customers across the world," said Ben Keeley, Engineering Manager with Ascent Vision Technologies. "In a global footprint, and really making an impact to National Security and global security." [KBZK]

Missoula County is leading the state in job growth according to the Montana Department of Labor and Industry. "I think it's the fundamentals of our economy right now. We have great leaders in our businesses. We have abundant talent coming out of our university and people who live here with these are really exceptional partnerships," Missoula Economic Partnership CEO Grant Kier said. "I think between the public and private sector making smart investments in growth." The county has the highest job growth rate thanks to a variety of factors including great economic leadership and business innovators. Job growth is coming in a variety of fields, including healthcare, construction and manufacturing. And one sector that is seeing steady growth is the tech sector. Along with job growth, wages have also gone up in Missoula County and officials say the combination of the two increases really show that the Garden City has a healthy growing economy. [KPAX]

After 12 years in the Flathead Valley, Agape Home Care is expanding across Montana. The home-care service is franchising its model and rebranding under the name Epaga, or Agape spelled backward. “We’ve always known that we wanted to expand Agape Home Care,” said Chief Operations Officer Julie Brubaker. In 2007, she partnered with Inga Lake to create the in-home, non-medical care service for people who are elderly or those who live with disabilities. The idea to expand had been percolating for many years between them and General Manager Kevin Lake, Inga’s husband. The actual franchising process has been in the works for about a year, according to Brubaker. Part of that extensive process involved navigating legal particularities such as the trademark name. In the first year of franchising, Brubaker said the goal is to expand throughout Montana. “We know Montana,” Inga said. After that, they hope to branch out into other Western states and beyond. They expect to spend considerable time training new owners at first, but they emphasized, “The franchises are all independently owned and operated. They have our standards, as well as Agape’s resources, training and years of practical wisdom,” Inga explained. [Daily Inter Lake]

Cloud Peak Energy recently announced that it's selling its three Power River Basin coal mines to the Navajo Transitional Energy Company, the winning bidder of its Chapter 11 bankruptcy auction. The Gillette, Wyoming-based company said the sale, which was approved by a federal bankruptcy judge in Delaware, includes nearly all of Cloud Peak's assets. Navajo Transitional Energy will pay $15.7 million in cash, a $40 million secondary lien on all assets and a five-year royalty on future coal produced. In a news release, Navajo Transitional Energy leaders said they're excited to continue operations of the mines, which employ about 1,300 people, nearly all in Montana and Wyoming. "NTEC will continue its efforts to lead conscientious energy development while striving to balance job growth and protecting the environment for future generations.” said CEO Clark Moseley in a statement. “We have proven by our extremely successful management of the Navajo Mine that we know the business and are capable of returning the Cloud Peak mines to, safe, stable and profitable operations while maintaining their excellent safety performance and reclamation efforts.” [KTVQ]

Processing elemental phosphorus waste at the old Solvay site eight miles west of Butte could begin as soon as next year. The more than $18 million plant, now under construction in the Montana Connections Business Development Park off Interstate 15, is the result of a nearly 20-year-long process to determine what to do with the roughly 500,000 gallons of highly flammable elemental phosphorus waste stored on the site. Belgian-based Solvay, which owns the site, and the Environmental Protection Agency agreed a couple of years ago to the concept of Solvay constructing a new plant that is expected to process the waste for the next seven or eight years. Once all the on-site hazardous phosphorus has been put through the furnace, the company will accept elemental phosphorus waste from outside sources and keep operating. Once the plant is ready to operate, Solvay will hire about eight new workers to handle the toxic material and the plant will operate on a 24-7 basis, Bersanti said. [Montana Standard]

ClassPass continues hiring in Missoula; grows workforce to more than 100

Calling it a valuable tool for economic development, Missoula County this week agreed to amend a state grant that will enable ClassPass (hiring) to create 80 additional Missoula jobs, bringing the positions filled in the company’s Missoula office to more than 100. Provided by the Big Sky Economic Development Trust Fund, the grant provides a reimbursement of up to $7,500 for each job created. The positions must pay at least $18.99 an hour to be eligible for that level of reimbursement. The contract was extended from the company’s original plan to create 40 jobs and is valued at up to $600,000. “Their award amount has been doubled, and they’ve been assisted to create another 40 jobs. That’s a total of 80 jobs,” said Nicole Rush, grants administrator with the Missoula Economic Partnership. “I’m pretty sure they’ve already hired most of these people.” Roughly 24 companies in Missoula have used the Big Sky grant to create 532 jobs since 2013, according to MEP. They’ve received a collective $3.7 million in funding and pay roughly $20.6 million annually in new wages. [Missoula Current]

Billings airport gets ready for its $55M launch into the future

Next month Billings Logan International Airport begins a four-year juggling act, balancing a massive $55 million remodeling project while carrying on with daily operations. As painful as the process may be, it's a welcome challenge, said airport director Kevin Ploehn. This project has been a long time coming. Starting next month, the Billings airport begins phase one of a massive remodeling project that will expand its two concourses and increase the number of flight gates from five to eight. It will add a cafe, gift shop and bar, and include a wide-open "great room" with a wall of glass facing the runways, a fireplace and children's play area. The entire project is scheduled to finish by March of 2023 and will be paid for through FAA grants, airport funds and revenue bonds. The whole goal of the remodel is to expand the number of flights and airlines the airport can accommodate, and to give the airport a modern look and feel. [Billings Gazette]

Last week the Montana Department of Labor & Industry officials visited the Idaho Forest Group St. Regis Mill as 12 apprentices signed paperwork to join the company’s first Montana Registered Apprenticeship program. Chris Clairmont, Principal of Superior High School, said the School to Registered Apprenticeship partnership is bringing new opportunities for young people to stay in the area. “We want kids to have a plan for after high school. We can help them start their future careers and stay in the community through things like this,” Clairmont said. “We want to provide a good future for whatever our kids want to do, and this is a good option.” This apprenticeship opportunity and mill has brought a much-needed source of employment growth to the area. Unemployment in Mineral County is currently at 3.9%, placing them 51st when compared to all 56 Montana counties. Our department is committed to implementing training programs like this to work to give Montanans the skills they need to join the workforce for increased economic stability. [Clark Valley Press]