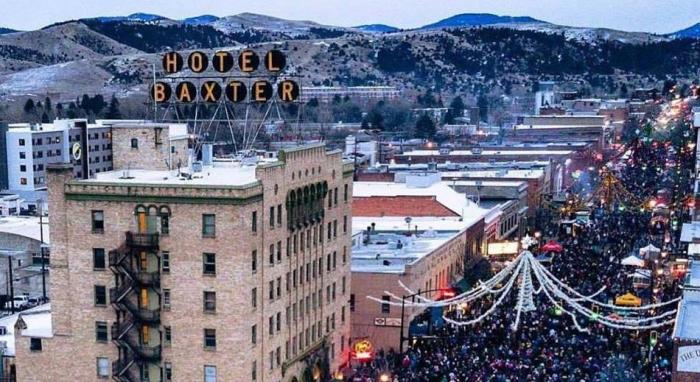 Well, this is it! Get caught up on this week's business news with our last Montana Skim of 2019. We are so thankful for each of you - for reading, following and sharing The Work Spot MT with all your friends and family during this past year. It's an honor to be building this Montana resource for Montana professionals, together. Now that our Montana communities have officially kicked off the holiday season (Bozeman Christmas Stroll pictured) and ski resorts are open, it's now time to sign off and wish you all a wonderful holiday. We'll be back in your inboxes in January 2020!

The Big Sky Economic Development will receive a $2 million federal grant to redevelop the historic Montana National Bank building in downtown Billings and turn it into an entrepreneurial center for Big Sky EDA's Rock 31 program. Rock 31 provides local entrepreneurs with mentorship and resources to start or expand new companies. “It’s an exciting time. Billings was selected to receive a very important grant from the Federal Economic Development Administration to partner with the community on supporting the growth of entrepreneurship in our community,” said Big Sky EDA Executive Director Steve Arveschoug. The grant comes from the U.S. Department of Commerce. According to a release from the commerce department, the grant "will be matched with $2 million in local funds and is expected to help create 95 Montana jobs and generate $6.6 million in private investment." Design and architecture planning still needs to be done for the new space. Arveschoug estimated construction wouldn't start until 2021. [KTVQ]

Can Do: Paul Gladen on creating opportunities for rural entrepreneurs

Paul Gladen of Missoula came to Montana in 2008, armed with a degree from Oxford University and more than 15 years of experience working with Arthur Andersen and his own firm Muzeview. Since then, Paul launched the Hellgate Venture Network, a Missoula-based local entrepreneurship forum. In 2009, he was the natural choice to lead the Blackstone LaunchPad and has since co-founded the Montana Code School and the Accelerate Montana's Rural Innovation Initiative. On today’s Montana Public Radio’s Can Do: Lessons from Savvy Montana Entrepreneurs, Paul discusses all things start-up. He’ll tell us what it takes to successfully launch a new business endeavor, particularly if you plan to work in a rural environment. [Montana Public Radio]

Audience Awards moves to Missoula this week, with spotlight on women filmmakers

Governor Steve Bullock recently announced that Montana will again partner with the SANS Institute to provide high school girls the opportunity to learn cybersecurity skills and compete for college scholarships through the 2020 Girls Go CyberStart challenge. “Girls Go CyberStart encourages girls to explore career options in cybersecurity through a fun and engaging program while allowing students to win college scholarships,” Governor Bullock said. “This is an excellent opportunity for girls to practice cyber and technology skills and bring more diversity to the field.” Montana first participated in the Girls Go CyberStart initiative in 2019. During the 2019 challenge, 70 girls from 11 Montana high schools participated and a total of $2,750 in cash prizes and scholarships were awarded to Montana players and their schools. [Kootenai Valley Times]

Enrollment has been falling at most Montana University System campuses, but there’s good news on the horizon. After dropping for years, the number of Montana high school graduates has finally hit bottom and is expected to increase in the next eight to 10 years. “There’s an agreement that we have reached the low point and those graduate figures are expected to climb over the next eight years,” John Thunstrom told the Montana Board of Regents at their meeting last week in Bozeman. MUS officials have been watching for years as the number of Montana high school graduates has steadily declined, hurting enrollment at most Montana public college campuses, with the exception of Montana State University, which has been an anomaly with increased enrollment the past twelve years. But demographics aren’t the only reason MUS enrollment has taken a hit – a strong economy with a low unemployment rate lures many high school graduates straight into the workforce. One way the university system hopes to reach potential students is through a new online portal. It’s intended to make it easier for high school students to find out about the wide range of career, training and college options offered by the state’s two-year and four-year colleges. The website is a place where students, parents and school counselors can find out how students can follow a career path, where they can earn a welding certificate or learn a trade, where they can earn degrees to become a teacher or a biologist or where they can find out how to pay for school. [Bozeman Daily Chronicle]

Why millennials are moving away from large urban centers

For years, rural areas and small towns consistently lost some of their most talented young people, who moved to urban centers. But recent census data indicates that this “brain drain” phenomenon is subsiding as both millennials and more Americans of all ages are increasingly choosing to live in suburbs and smaller cities. Jeffrey Brown of PBS NewsHour traveled to Montana to find out what's driving the migration. Read the full transcript of his interviews here. [PBS]

The latest company to place roots in Missoula plans to create nine Missoula jobs over the next two years as it relocates a portion of its operations from California to Montana. Bedrock Sandals, founded in 2011 by Dan Opalesc and Nick Pence, expects to make the move in January, with a launch party planned next spring. “We looked at places like Boise, Bend and Bozeman, and other mountain towns,” Opalesc said Tuesday. “We really liked Missoula because of the strong sense of community here. We really liked how it wasn’t just a resort-type town.” Bedrock’s long-term location hasn’t been determined, though Opalesc said they’re looking around the downtown district. “We’ll have a flagship store at our (Missoula) location where we hope to attract locals as well as a lot of our customers from afar,” he said. “Our design and development will be done there. Our stateside assembly and manufacturing will remain in California, but all of our fulfillment will be in Missoula.” Bedrock, through the Missoula Economic Partnership, received approval Tuesday from Missoula County commissioners to apply for a job creation grant through the Montana Department of Commerce. The company plans to create roughly seven Missoula jobs in 2020 and grow its workforce to 10 the following year. While Opalesc didn’t reveal anticipated pay, the state grant requires a company to pay at or above the local median income, or roughly $19.86 an hour in Missoula. Opalesc said the full-time jobs will include paid time off, retirement contributions and health care. [Missoula Current]

C2M beta, the corporate accelerator of Blackfoot Communications (hiring), today announced the graduation of three companies from its inaugural program and introduced three more technology companies to the program. C2M beta is the first of its kind in the mid-tier telecommunications industry. “This year’s cohort was geographically diverse, with startup companies representing Missoula and Bozeman in Montana and Orlando, Florida,” said Joe Fanguy, Blackfoot VP, strategic development. The 2019 C2M beta cohort included: docity - partners with communities to bundle telehealth access with the products and services that households already buy and use every month; Blocky which develops a suite of data immutability products with application on distributed ledger technologies; and Prime Labs - providing a user-friendly platform for data processing, analysis, reporting and visualization related to drug discovery instrumentation. The introduction of the C2M beta 2019 cohort brings a total of six companies having participated in the program to date. The 2018 C2M beta cohort included PatientOne, Audience Awards and Cartalytics. [Business Wire]