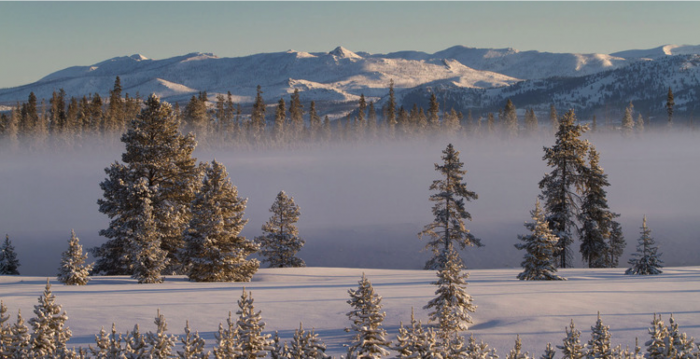 While welcoming the periodic blue skies and wishing for warmer temps, get caught up with this week's skim of Montana business news below.

Bozeman-based AdvicePay (hiring), a fee-payment-processing platform designed exclusively for financial advisors, announced earlier this year a seed extension funding round of $2 million that bypassed the traditional venture capital investing route to instead be “crowdfunded” from within the advisor community. Proceeds from this innovative funding approach will be used to power AdvicePay’s growth plans, including the launch of a new enterprise version to meet strong demand from the hybrid independent broker-dealer and large RIA marketplaces. AdvicePay Enterprise, built over the past four months from AdvicePay’s seed extension funding, includes expanded features, functionality, and dedicated tools built specifically for organizations that support large numbers of advisors and must manage key oversight and compliance protocols. According to co-founder and company CEO, Alan Moore, “The interest for an Enterprise version of AdvicePay to meet the specialized needs of larger organizations serving advisors has been tremendous. Firms have been looking for a solution to support a fee-for-service model that is compliant and relieves them of the operational nightmares of manual processes for handing a high volume of fee payments. As a result, we are working with some of the largest organizations in the industry, with several in the onboarding process and a very robust pipeline.” [AdvicePay]

Recently, the who's who of laser makers and others in the photonics industry gathered for an international awards ceremony that has been called the "Photonics Oscars." It was a reunion of sorts for alumni of a Montana State University lab that helped launch their careers. The four engineering and physics graduates who once worked in MSU's Spectrum Lab gathered in San Francisco earlier this month as finalists at the 2019 Prism Awards for Photonics Innovation. They ended up taking home two of the 10 awards. Bozeman-based Blackmore Sensors and Analytics (hiring) won the Prism award in the transportation category. And, a second company with an MSU connection, Colorado-based Double Helix Optics, won in the diagnostics and therapeutics category. MSU Spectrum Lab director Randy Babbitt, said he agrees and is proud of MSU’s role in the remarkable growth of Bozeman’s photonics industry. There are now more than 30 optics companies in Bozeman, employing a total of at least 800 high-tech workers. [Montana State University]

Bozeman-headquartered West Paw (hiring), top manufacturer of eco-friendly pet products, has been named one of the inaugural winners of “100 Top Impact Companies,” which was ranked by Real Leaders magazine, Big Path Capital and B Lab. The ranking is based on the formula for force, that is mass times acceleration: Three-year growth rate (acceleration) plus Revenue (mass) plus B Impact assessment score equals “A Company’s Force for Good score.” In response to the recognition, West Paw owner and president Spencer Williams said “the company cares and gives 100 percent, which makes me give 110 percent back to the company. The people are the best.” [Pet Product News]

A Big Sandy owned and operated business that started five years ago is nearly doubling its workforce and looking to start selling products all across the world. A press release last month said that Chouteau County will receive a grant from the Department of Commerce Big Sky Economic Development Trust Fund on behalf of Big Sandy Organics LLC. This grant will reimburse Big Sandy Organics up to $22,500 for creating three new Montana jobs. "Grant funds will be used to purchase equipment, machinery, construction materials and for wage reimbursement," the release said. Big Sandy Organics manufactures and sells Kracklin' Kamut Brand Wheat Snacks, an organic snack food made with Kamut grain, a strain of an ancient grain trademarked by Big Sandy Organics founder Bob Quinn. The grant will reimburse them for creating three full-time jobs, which will pay a minimum of $15 an hour. This will double Big Sandy Organics' workforce, which currently has two full-time and three part-time employees. [Havre Daily News]

Kalispell-based software development company ExcelliMatrix wants Montana businesses to have access to the same technology advantages and tools enjoyed by those in the biggest metropolitan areas. “ExcelliMatrix is in the business of providing our clients with the best possible technology consulting we can, for their specific situation,” said founder Leland Johnson. “And every client has a different situation.” ExcelliMatrix, with three additional offices in Bozeman, India and the Czech Republic, provides e-commerce solutions and enterprise software for businesses that need more than off-the-shelf software but aren’t big enough to have an in-house development team. “It can be their database systems, writing a web app, developing a mobile app — it could be anything that they require when their systems aren’t meeting their growth needs,” Donna Johnson, wife of Leland Johnson, said. [Daily Inter Lake]

The Bozeman area has the strongest economy for a city with fewer than 50,000 people in the U.S., according to a new national report. Each year, independent research firm POLICOM ranks areas for “economic strength” — the long-term tendency for a place to grow in size and quality. For a second year in a row, Bozeman topped the micropolitan list. “The rankings do not reflect the latest ‘hotspot’ or boom town, but the areas which have the best economic foundation,” William H. Fruth, president of POLICOM, said in a statement. Bozeman’s Director of Economic Development Brit Fontenot said a swelling of Top 10 lists can drown each other out and are typically soon forgotten. But, he said the POLICOM list used information from sources like the U.S. Bureau of Economic Analysis and reflects something longer lasting. Bozeman still has some big economic hurdles. Fontenot said there are three goals constantly on his mind: creating a foundation for well-paying Bozeman area jobs, attracting qualified people to fill those positions and ensuring workers can afford to live in Bozeman. Bozeman wasn’t the only micropolitan town in Montana to make the list. Kalispell ranked 14th and Helena followed at 49th place. The state’s larger cities came later among metropolitan places evaluated. Among 383 areas, Missoula ranked 75th and Billings landed at 87th. [Bozeman Daily Chronicle]

Butte’s Tourism Business Improvement District (TBID) committed over $84,000 recently to projects that its board members hope will promote tourism and more overnight stays in Butte. The TBID board consists of local hoteliers and collects a $1 assessment for every overnight stay in Butte. The board uses the money to fund events hosted by performing-arts venues, athletic facilities and other types of venues, alongside festivals and other projects anticipated to contribute to visitation. The TBID also funds ad campaigns promoting Butte as a tourist destination, among other types of allocations. You can find a complete listing of the grants here. [Montana Standard]

Despite the weather we’ve had the past few weeks, it’s hard to think of Montana as a bicycle mecca. But, for more than two decades, bicycles have been shipped all over the world from Pursuit Cycles/Strong Frames, a little shop on Bozeman’s downtown Willson Avenue. Owner, Carl Strong, began building bikes while attending Montana State University and now, more than 20 years later, ships frames (both steel and carbon fiber) all over the world. While Strong admits he might be able to do this somewhere else, he won’t for no other reason than he doesn’t want to. According to Strong, “We try to do everything that we possibly can locally. It’s very important to us to be a Bozeman, Montana business.” [KXLF]

An upstart digital health company based in Missoula said Friday it had completed its seed round funding and plans to hire five employees in the next 60 days. PatientOne, Inc. (hiring) has developed a platform to improve the surgical episode of care and provide remote patient monitoring services to independent surgeons, surgery centers and hospitals. In a financial statement issued on February 1, the company said the funding round follows its completion of the competitive Boomtown HealthTech Accelerator program last May in Boulder, Colorado, along with Blackfoot Technology’s new C2M innovation lab in Missoula in January. “The company has developed proprietary methods for providing comprehensive patient education, automated notifications, and reminders to keep patients on track, and tools to allow patients and their doctors to stay connected, increasing patient safety and reducing unnecessary hospital readmissions, while improving the doctor’s bottom line,” the firm said in its funding statement. The seed round investment is led by Dundee Venture Capital of Omaha and Revolution’s Rise of the Rest Seed Fund. Other investors in the round include Next Frontier Capital of Bozeman, Goodworks Venture fund of Missoula and Service Provider Capital of Golden, Colorado. [Missoula Current]

Polson-based Adelos, Inc. was awarded a grant from the Binational Industrial Research and Development (BIRD) Foundation to promote collaboration between a U.S. company and an Israeli company in various technology fields. Adelos was teamed with Israeli company 4Cast Systems (Petach Tikva, Israel) to develop technology to help detect and prevent pipeline disasters. In addition to providing conditional grants of up to $1 million for approved projects, the Foundation assists by working with companies to identify potential strategic partners and facilitate introductions. [Adelos, Inc.]

Can Do: Helping take start-ups to the next level (featuring Next Frontier Capital's Will Price)

Will Price’s motivation for founding Bozeman-based Next Frontier Capital in 2015 is deep-seated: he’s a member of an extended Montana family, and like many, work early in his career sent him far away from the state. By giving tech start-ups the capital they need to stay and create Montana jobs for the next generation of Montanans, Price’s goal is nothing short of a reversal of the Treasure State’s historic brain-drain. Price is upbeat about investing in Montana’s future. “I know people in Montana feel bittersweet about this, but I think Montana is on the map, as a destination for people and talent and capital,” Price says. On this recent podcast episode of "Can Do: Lessons From Savvy Montana Entrepreneurs," Price and host Arnie Sherman discuss the thinking behind Next Frontier Capital’s 17 investments to date, the challenges regional venture funds face and how start-ups can attract venture capital in today’s marketplace. [Montana Public Radio]

Hemp oil will be processed in Conrad at new Montana facility

Cannabidiol oil, a non-intoxicating hemp plant extract also known as CBD, will be processed from Montana-grown hemp at a new processing facility that will open soon in Conrad by Brendon Hodgson, owner of Kansas City-based Evolution CBD. Evolution CBD’s products include drink mixes, topical serums, gummies, face and muscle creams and lip balm. Hodgson plans to purchase home-grown hemp from Big Sky Hemp LLC, which grows hemp outside of Conrad. Additionally, a second hemp processing facility is in the works in Cascade County. CBD has been touted for its health, pain-relief, anti-seizure and anti-stress related benefits and has since taken off. The Conrad processing facility will be fully operational in a few weeks and could likely end up employing 20 to 30 people according to Hodgson. Evolution CBD has more than 250 of its own franchises and is now considered an industry leader in CBD from industrial hemp.  Great Falls Tribune]