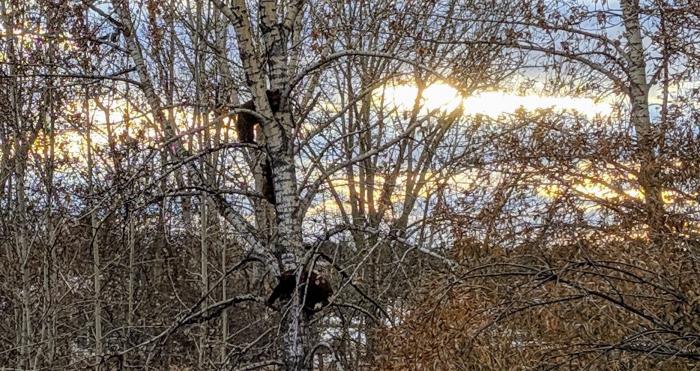 Take a look at these three little bears climbing in the trees of Bozeman this past week before diving into this week's skim of Montana business news below.

As online dating takes over traditional in-person dating in what is reportedly a $4 billion industry, Charmed dating app co-founder Taylor Margot says the Missoula start-up aims to raise at least $2 million from angel investors by the end of the first fiscal quarter of 2020. So far, Charmed has raised $50,000 to finance the app that connects friends in real time, as if they’re conversing face-to-face about dating hook-ups, suggestions, referrals, woes and successes. “We view Missoula as the Berkeley of the Rocky Mountain West – which is to say, the best mountain town in the country,” said Margot, 32, who founded Charmed with David Blanchard, 29, and Jack Peterson, 29 – all former UC-Berkeley students and residents. About two-thirds of Charmed’s 15 employees live in Missoula. According to Margot, “We are looking to hire a Chief Marketing Officer and separately a Head of Growth and we will do another hiring push in (fiscal) quarter two of 2020.” On Nov. 7, Charmed will be one of 12 Montana-based growing tech companies to compete in the Early Stage Montana Statewide Showcase in Missoula for a potential $50,000 cash investment. [Missoula Current]

In a recent post by ShivarWeb, the writers dug into US Census Bureau data to uncover the top 20 places in America that hit a sweet spot between being small and self-contained (a micropolitan) and a popular place to start a new business. Micropolitan areas are populated areas that have too much population to qualify as a rural area, and too few commuting ties to a larger city to qualify as part of a larger metropolitan area. According to the data, there are 536 micropolitan areas in America and of this, the 20 with the most startup activity were further described in the full report here. Bozeman, with a population of 111,876, and at the gateway to Yellowstone National Park along with the largest ski resorts and outdoor opportunities in the United States was the top of the list. Bozeman-based businesses mentioned in the report included Schedulicity, Quiq (hiring) and Absaroka Energy Company. You can view the full list of 536 areas here. [ShivarWeb]

Multiple reports recently released by Montana State University’s Montana Manufacturing Extension Center (MMEC) highlight the strength of Montana’s manufacturing sector. The Bureau of Business and Economic Research at the University of Montana prepared the 2019 State of Montana Manufacturing report and surveys of Montana manufacturers and MMEC clients, analyzing data from various sources and offering an overview of statewide manufacturing trends. According to the report, manufacturing was equal to tourism and ahead of mining and farming in statewide earnings in 2018. With over 1,000 total manufacturing establishments in Montana last year, the fastest-growing sector was “beverages and tobacco” with the number of establishments in this sector more than doubling over the past year. In addition to the Manufacturing Report, the 2019 Manufacturers’ Survey shed light on manufacturers’ own perspectives on recent industry trends. More than half of respondents reported that their gross sales and production increased over the past year and half said their profits increased. More than half expected their production and gross sales to continue to increase in the next year. According to the report, there are currently 25,100 Montana jobs in manufacturing across the state. This represents 3.7% of the state’s total workforce, up from 3.2% in 2010. [Daily Interlake]

Stockman Bank (hiring) cut the ribbon on its newest Missoula facility earlier this month, punctuating the city’s growth and its own success in the region. Bob Burns, the bank’s Missoula market president, signed on with Stockman five years ago when the company’s brand had little presence outside the state’s eastern reaches. It’s now one of the fastest growing financial institutions in Missoula with over 65 employees across the city. Over the past few years, Burns has been consistent in highlighting Missoula’s financial growth, along with that across western Montana. The city’s economic upswing has enabled the bank to grow both its presence and its customer base. The new location also helps it reach the Bitterroot Valley, catching the eye of commuters heading home to outlying communities. [Missoula Current]

According to employment projections recently published by the Montana Department of Labor & Industry, if you are looking for work in Montana you’ll have tens of thousands of job openings to choose from over the coming decade. The labor department figures, updated annually and released for 2018 to 2028 in late September, estimate 62,300 Montana job openings each year through 2028. State economists expect 6.2% of those openings to be newly created positions, distinct from positions that come open as workers retire or change fields. Job openings created when workers change jobs within a profession aren’t included in these figures. The state labor department estimates that 46,240 openings a year will be in occupations that require a high school education or less. And, about 38% of projected job openings will be in fields with a median wage of more than $33,900 a year, equivalent to full-time work at $16.62 an hour. On the upper end of the education spectrum, the labor department projects that Montana will have about 131 annual openings for lawyers, a profession paid a median wage of $74,510. [Montana Standard]

Last year the Montana Department of Labor and Industry compared the number of child care providers to the number of children younger than 5 years old in Missoula County and discovered that the potential clientele was more than double the capacity. But as the problem has gotten worse, it has also attracted wide attention – along with some creative solutions. One promising approach organized under the United Way of Missoula County is aimed at building a community-wide connection between parents, caregivers and other organizations serving young children. The Zero to Five initiative was launched by the Headwaters Foundation in December 2018 in four pilot counties: Missoula, Flathead, Silver Bow, and Lewis and Clark. In Missoula, working groups with Zero to Five have been meeting regularly to focus on improving access to high-quality child care and enhancing support for families. Earlier this month, a panel organized by the initiative shared some insights into current barriers. Audience members noted the cost of renting a home or location and compliance with expansive state laws as barriers to entry. Along with discussing the challenges, accolades were given for the companies who have been working to address the problem such as Submittable (hiring), who recently opened its new onsite child care facility, and the Bozeman-based startup MyVillage (hiring), which helps those who have a passion for working with children a rewarding career path by helping them start and run their own high quality childcare programs out of their homes. MyVillage handles all the headaches involved with marketing, licensing, insurance, billing and a myriad of other small-business duties historically taken on by someone looking to start their own in-home childcare program on top of caring for and teaching children. [Missoulian]

Rock31, Billings’ entrepreneur program powered by Big Sky Economic Development, will host TechStars Startup Weekend, on the campus of Montana State University Billings, November 1-3. Startup Weekends connect people with tools and resources and other passionate people to work together to build a strong, successful businesses, according to a news release from organizers. The event is an opportunity for entrepreneurs to pitch business ideas, join a team filled with mentors and technical/business experts, create a prototype of an idea, validate the business idea, receive feedback from experienced entrepreneurs, and 54 hours later share the final results with the community. Entrepreneurs can learn how to create a real company, work with the best mentors, investors, co-founders and sponsors, all who are ready to help entrepreneurs with their start-up ideas. [Billings Gazette]

Montana State University’s Department of Education and its partners have received funding totaling $6.2 million for a program delivered mostly online that is designed to recruit, train and mentor dozens of high-quality educators to work in rural areas of Montana. The funds include a $3.1 million grant from the U.S. Department of Education and more than $3.1 million in matching funds and services from nearly a dozen partner organizations. They will be used for a five-year project, "Addressing Rural Recruitment and Retention in Montana," that aims to address the shortage of teachers in rural locations across the state. As part of the project, MSU will educate 18 teachers during the grant’s first year through the university’s online Master of Arts in teaching program. It will then educate 30 teacher residents annually in years two and three, for a total of 78 teachers educated. After students complete the master’s degree and obtain a position in a high-need rural school, they will be supported in the first two years of their careers with carefully designed mentoring, induction and online professional development learning modules for new teachers. [Montana State University]

Nick Checota, owner of Montana-based concert promoter Logjam Presents, announced the development of the Drift, a new $100 million entertainment complex that will include a 6,000 capacity indoor venue. The Drift will be situated on the banks of the Clark Fork River in downtown Missoula. In addition to the state-of-the-art venue, the Drift will include a 200-room boutique-style hotel, approximately 10,000 square feet of additional event space, two restaurants, a 400-stall parking facility and a riverfront promenade that runs along Missoula’s river trail system. The project will also include 45 residential condominium units. “We see the Drift as a transformational project for Missoula and its downtown riverfront. The development not only establishes an entertainment civic center on the river, but will serve as an economic engine for all of downtown,” Checota said. The development team plans to work through the design and construction preparation of the project over the next eight months, with the target start of construction during the summer of 2020. [Logjam Presents]

The TowHaul company is a familiar name in the construction and mining industries - but not everyone knows that it's also a big economic powerhouse based in Belgrade. TowHaul manufactures massive towing equipment for mining and the hauling of equipment. Their product is currently in 26 different countries. The company’s founder moved the business to Montana from Canada in the late 1990s. The current CEO, Kim Wild, says they have no regrets. With Wild as CEO, TowHaul has gone from a 16 employee operation to 70. Wild says the company generates close to $21 million a year for the Belgrade economy. [ABC Fox Montana]

About 210 people, most from Lincoln County, have applied for jobs at Isotex Health since the hemp production company closed a deal to buy the old Stinger building in Libby in September. Co-founder and Chief Executive Officer Jason Cross said almost all the applicants hailed from the area. The facility will produce an isolate for cannabidiol (CBD), a hemp extract increasingly used for its health and medicinal qualities. The plant employs 10 people thus far and that number is expected to eventually rise to 120 workers. Isotex will be housed in the former Stinger Welding building in the Kootenai Business Park. The building, which previously was the manufacturing site for large steel girders, has been empty for several years. Cross said he hopes the company’s presence will spur economic growth in the area. [Daily Inter Lake]

Whitefish tech startup, Tourbase, is set to compete with 11 other Montana-based startups in the second-annual Early Stage Montana Statewide Showcase on November 7 in Missoula. Early Stage Montana is a nonprofit that provides training and mentorship to accelerate the growth of emerging Montana technology business, according to a press release about the contest from the Montana Technology Acceleration Association. This is the second year the association has hosted a competition for Montana-based tech startups to pitch business ideas and vie for $50,000 in funding. Tourbase in Whitefish is a “cloud-based software for turnkey reservations, transactions and guest communications for tour managers, operators and outfitters.” They are the only Flathead Valley representative in the competition, which also features tech startups from Bozeman, Billings, Livingston and Missoula. Find the complete list of participants here. [Daily Inter Lake]