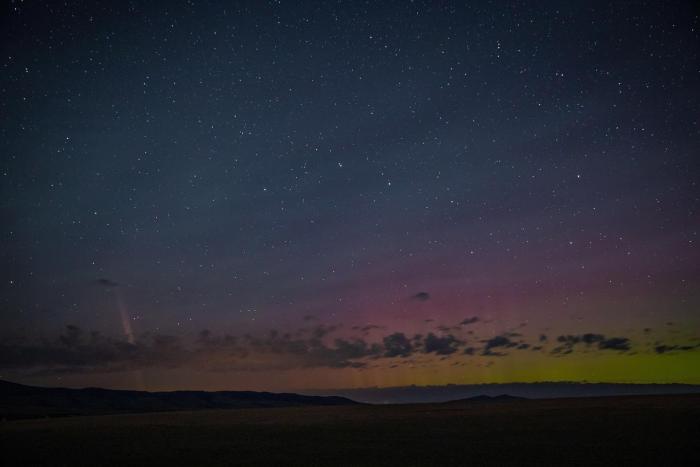 While taking in this spectacular little glimpse of the Northern Lights recently from Bozeman, Montana (as captured by the talented David Hebert), get caught up with this week's skim of Montana business news below.

The Montana High Tech Alliance recently announced its annual list of Montana startups to watch. And with more support for startups, it’s no wonder the 2019 list is up to 11 companies. With nominations from experts at Next Frontier Capital, Frontier Angels, Montana Manufacturing Extension Center, MSU Blackstone LaunchPad, and UM Blackstone LaunchPad, startups in Billings, Bozeman, Missoula and Whitefish made the final cut. Finalists include companies five years old or younger that fit at least two of the following criteria: steep revenue growth and/or are working in a high-growth sector, poised to launch high-potential products or services, own or are developing valuable intellectual property, on track to land major clients or enter new markets, plan to expand operations or add a significant number of Montana jobs in the next year and/or have management teams led by experienced entrepreneurs or top experts in their fields. Finalists include: Bozeman-based Blacksford, DugalHealth, My Shipping Post and The Insight Studio (which also has offices in Missoula); Billings-based Cardsetter, Ferho and RavenCSI; Missoula-based Charmed, DRIMS and Prime Labs and Whitefish-based Neuro-ID [hiring]. [Montana High Tech Business Alliance]

SoClean, a company that sells continuous positive airwave pressure (CPAP) machines, has plans to open a facility in Kalispell that eventually will employ upwards of 250 people. The New Hampshire-based company is opening its Kalispell facility in October. A press release said SoClean plans to fill 80 to 100 positions in the first year and will eventually hire “upwards of 250 or more employees.” “We see Kalispell as an ideal location to expand our offices into the West,” SoClean Chief Executive Officer Bob Wilkins said in a prepared statement. “Our goal is to leverage the talented personnel locally and create additional Kalispell jobs and business opportunity.” The Kalispell location will serve as the company’s second North American office and will operate as a technology hub, customer call center and sales location. SoClean also has locations in Canada, the United Kingdom, France, Germany, Italy and Spain, with plans to expand to Australia as well. [Daily Inter Lake]

American Airlines is adding new direct flights from Bozeman to Los Angeles, plus the airport's first service directly to Philadelphia. “We started service to the east coast to Newark back in 2012, and we continue to see that east coast demand grow,” Airport Director Brian Sprenger said. “More marketing efforts have been including the east coast, and we’ve seen it just [develop] very strongly. It’s a tremendous increase in seats compared to what we’ve had. We started out with 76 seats a day on American four years ago. We’re at 876 seats on a Saturday this coming summer on American alone,” Sprenger continued. Daryl Schliem, president of the Bozeman Chamber of Commerce, says they'll be able to speak with more financial investors from the East Coast. The chamber president says whenever there is a new direct flight there is a direct correlation to new home mortgages being taken out from area banks. [ABCFox Montana]

Helena-headquartered Anderson ZurMuehlen (AZ) (hiring), a certified public accounting and business advisory services firm, has announced its intent to purchase Helena-based Information Technology Core (ITC). The transaction will expand the firm’s information technology consulting division, Anderson ZurMuehlen Technology Services. ITC staff will join the Anderson ZurMuehlen team making AZ one of the largest technology service providers in Montana. Information Technology Core is headquartered in Helena, Montana with additional locations in Missoula, Montana and Salt Lake City, Utah. AZ CEO and President Don Laine states, “AZ is pleased to add to our already robust line-up of information technology services. Our team has worked with ITC for years. We have come to know Ken and Donny very well, and we have a great relationship.  AZ is thrilled to have ITC join our team and are excited about the expanded IT options we will be able to offer to both of our clients.” The transaction is expected to close on October 1, 2019. [Anderson ZurMuehlen]

Morton Buildings is making its way out west and has now established a location in Sidney, Montana, as of January 2019. With a salesman on the ground and several buildings up, Morton knows one thing for sure — its economic boom in the area is just beginning. The employee-owned company sells a variety of buildings, from suburban garages to large shops, warehouses, dealerships and even homes. The buildings are categorized as residential, agricultural, equestrian, commercial or community. “Let’s say Morton does 3,000 buildings this year,” Janke said. “Two-thousand of them would be farm buildings.”As more buildings began to sell in western North Dakota and eastern Montana, Sidney became the next logical location. [Sidney Herald]

Montana State University’s TechLink Center has been awarded a federal grant to expand its assistance to technology-related businesses across Montana. The U.S. Small Business Administration announced last month that it had awarded a Federal and State Technology Partnership Program grant for $125,000 to fund TechLink’s Montana Innovation Partnership. Montana is one of 24 states to receive a FAST grant for the upcoming fiscal year. Grants are awarded through a competitive application process. Proposals were reviewed by a panel of representatives from the Small Business Administration, NASA, the Missile Defense Agency, U.S. Navy Office of Naval Research and the National Institutes of Health. Montana has received this grant in seven of the last nine years. “Montana State University is dedicated to expanding high-tech development and entrepreneurial opportunities in Montana,” said Brett Cusker, executive director of TechLink. “FAST funding will help more Montana companies focused on high-risk technology successfully compete for important seed capital through the Small Business Innovation Research and Small Business Technology Transfer programs.” [Belgrade News]

Three Bozeman businesses are being recognized for their efforts in creating workplaces deemed “great” by their employees. The Montana State Employers’ Council (MSEC) and the Bozeman Job Service Employers’ Committee (JSEC) made the announcement last week for the MSEC Employers of Choice Award. According to a press release, Anderson ZurMeuhlen – Bozeman (hiring), Buffalo Restoration (hiring) and Foundant Technologies (hiring) were selected for their dedication to providing healthy and positive workplaces and commitment to employees. “These three businesses created workplaces that balance work and life commitments to attract and retain talented employees,” Bozeman Job Service Employment Specialist Susan Hanken said. “With the low unemployment rate in Bozeman, businesses here are making the workplace a good place to stay and providing excellent perks, benefits and professional development opportunities.” [KTVH]

Wage growth in Montana was 6th fastest in the nation over the last decade. That was one among a number of rosey statistics shared by the Bullock administration during its release of the 2019 Labor Day Report. According to the Montana Department of Labor and Industry, Montana's average annual wages increased by $10,000 from 2009 to 2018. The report notes that the current economic expansion is now the longest in recorded U.S. History. Over the last decade, state data reports that the southwest region of the state has seen the greatest percentage of payroll employment growth, followed by northwest Montana. Central and eastern portions of the state have seen significantly less job growth. Montana, like other states, is facing a tight labor market as the baby boomer generation retires. Officials say Montana will lean, in part, on people moving to the state to fill the open jobs. They say the trend of more people retiring than joining the workforce each year could continue through 2025. [Montana Public Radio]

'Can Do': How Bozeman-based MyVillage is working to remake childcare

In a recent episode of Can Do: Lessons from Savvy Montana Entrepreneurs  by Montana Public Radio, MyVillage co-founder & CEO Erica Mackey and Chief Community Officer Elke Govertsen talk with host Arnie Sherman about what it’s like to be a daycare owner in need of business mentoring, or a parent desperate to find high-quality childcare. According to the Center for American Progress, 51% of Americans live in a daycare desert; a place with almost no openings for infants or toddlers in nearby licensed daycares or preschools. Those lucky enough to find openings often spend more on childcare than they can afford, and many educators can’t earn enough as preschool teachers to make ends meet. It was from firsthand experiences that two women and mothers saw an opportunity and drew on their past entrepreneurial experiences to launch MyVillage (hiring) in 2017. The platform that connects parents with trained, licensed daycare and preschool providers has grown at a rapid pace attracting $6 million in seed capital earlier this year, the largest seed round ever for a Montana start-up. In this episode, their concept of living as a village is also explored as well as what empowers them to challenge such a pervasive problem at the national scale. If you're one with a passion for young kids and looking for a career change where you can be your own boss, care for your own kids and earn great income, learn more about starting your own in-home childcare or preschool program with MyVillage in Montana or Coloardo and what it can offer your family and community here. [Montana Public Radio]