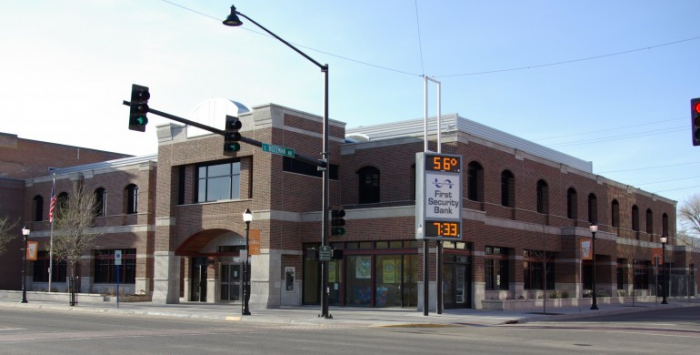 Two of the top-three ranked banks in Gallatin County are merging, resulting in control of approximately 35 percent of the banking market in the county. Intermountain Bancorp, Inc., the Bozeman-based holding company for First Security Bank, announced that it has joined the Glacier Bancorp family of banks, which includes Big Sky Western Bank. The second-ranked bank after the merger will be First Interstate Bank (with 14 percent market share in the area). Pending board and regulatory approval, First Security Bank will officially be under the Glacier Bancorp umbrella in early 2018. [Bozeman Chronicle]

Ground broke in October on the first building of Montana State University’s Innovation Campus, a 20,000-square-foot applied research facility. Connecticut-based Charter Realty & Development, a limited liability company based in Big Sky who is part of Innovation Campus Partners, is overseeing the development of the Innovation Campus. The campus is not owned by the university but by a separate nonprofit fundraising arm, the MSU Alumni Foundation. The 42-acre research park includes more than a dozen potential buildings, including specialized labs, research offices and manufacturing spaces that, according to its website, is “to strengthen the research capability of MSU and to expand the commercialization of technology related to MSU’s clusters of academic and research excellence.” Martel Construction and A&E Architects will also assist with the applied research lab, which is projected for completion in early 2019. [Bozeman Daily Chronicle]

Montana-based accounting firm Joseph Eve has joined Wisconsin-based Wipfli (ranked No. 22 on Accounting Today’s Top 100 Firms list this year) in a merger. This marks the fourth merger for Wipfli in 2017, and the second purchase the Wisconsin-based firm has made in Montana in recent years. Headquartered in Great Falls and with three full-service offices across the state of Montana and one in Utah, Joseph Eve provides accounting, tax and consulting services to businesses and individuals, with a strong focus on serving tribal governments and the gaming industry. The combined firm will employ approximately 1,900 associates and have 47 office locations across the United States, including several in Montana. [Accounting Today]

Columbia Falls-based company, SmartLam, is expanding its operations and headquarters to the former Weyerhaeuser lumber mill property with plans to quadruple production of cross-laminated timber (CLT). It also plans to hire more than 75 employees by the end of 2019. The deal will breathe life into the engineered wood product that is increasingly gaining traction as an innovative building material.

The expanded site will also help the company develop additional types of products. President and general manager, Casey Malmquist, recently said, “As more architects and builders learn about the performance and efficiency of CLT, demand for our products has accelerated rapidly.” Malmquist, who was recently featured in Fortune, started the company in 2012. It reached a sizable milestone a year ago when it received certification for its engineered wood products from the American National Standards Institute.