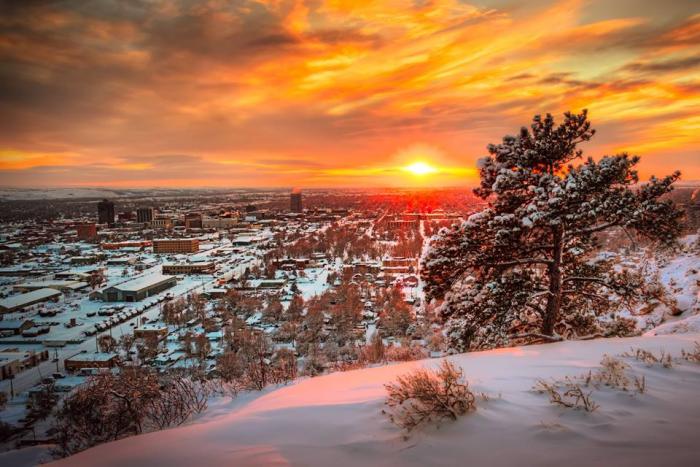 Governor Steve Bullock announced this week that the Israeli high-tech company 4Cast - a spinoff of Eltel - has chosen Missoula as the destination for its U.S. office. Per Bullock, “Montana is increasingly seen as an ideal choice for companies that not only value a strong business climate and educated workforce, but a place where quality of life matters.” The Governor’s Office of Economic Development, the Montana World Trade Center and the Missoula Economic Partnership worked closely with Eltel throughout the process of choosing a location for 4Cast’s U.S. office. The company plans to develop and sell its decision support predictive analytics solutions from Missoula, which currently target homeland security, defense, enterprise and healthcare personnel. The company hopes to create approximately 100 Montana jobs within the next several years and plans to begin hiring for sales and software development jobs in Missoula this summer. 4Cast expects to have its website launched by June of this year with further information. [Office of Governor Steve Bullock]

Finalists and winners of the 2018 Montana Tourism Awards were celebrated this week during the Governor’s Conference on Tourism and Recreation. The awards celebrate the outstanding work of the communities, businesses, organizations and people who strengthen Montana's tourism industry and contribute to maximizing its economic impact for Montana residents. Lt. Governor Mike Cooney who joined the attendees said, “Tourism is one of Montana’s leading industries, and although the landscape speaks for itself, much of the industry’s success is because of the men and women across the state who are working hard to develop tourism experiences, provide visitor services, and promote this special place.” Some of the award winners included Visit Billings for Marketing Campaign of the Year with the "My Amazing Place" video campaign and Red Ants Pants Music Festival for Event of the Year. Find a complete and impressive list of the 2018 finalists in each category here and the list of the winners in each category here [Montana Department of Commerce]

Education to eats: Student startup challenge at the University of Montana draws next-gen businesses to competition

Jennifer Sheets nailed her StorySquares pitch last week at the 28th annual John Ruffatto Business Startup Challenge at the University of Montana, securing the $15,000 first-place prize, as well as the People’s Choice award and its $3,500 purse. StorySquares is a web-based platform for the classroom that uses storyboard templates to help students write stories or reports from beginning to end, helping to improve writing proficiency at each grade level. With more than $50,000 in prizes on the line – and another $50,000 in in-kind contributions – the stakes were high and the nerves. There were several other wide-ranging solutions presented at the startup challenge from other participants, from a proposal to make use of food waste on college campuses by Freats (free eats), to distributing the “next great party-game experience,” as proposed by Game Ink. Aaron Benjamin of Ice Viper Hockey secured third place for his proposal to manufacture a high-stability street hockey puck “that turns asphalt into ice,” while Craig Koller tied for the position with his plans to launch a web-based platform to help contractors manage labor-union wage calculations. According to Jenni Graff, economic development director at the Missoula Economic Partnership, “This competition highlights the skills and work ethic that’s required to be successful in life. It’s exciting to see what other solutions for our lives will come out of this competition.” UM has hosted the startup challenge since 1989, showcasing new products and innovations presented by students each spring. It is the largest opportunity in Montana for students attending any state university to present their business plans to a panel of judges. Several existing businesses can trace their roots to the event, including Bozeman-based Cowboy Crickets,  Chilton Skis (which won third place at least year’s event) and Bahai Brazilian Cuisine, better known as Five on Black (which won the Lifestyle Prize in 2011). [Missoula Current]

Discussion of Bitcoin has been all over the news lately. If you don’t yet fully understand Bitcoin, we recommend skimming CNET’s Guide to Bitcoin from this last February to quickly get a more detailed understanding of what the cryptographic digital currency is and how it started. The fascination with Bitcoin caught the media’s attention when its price shot up from $750 in January 2017 to nearly $20,000 the following December. This caused some experts to assume it was merely a speculative bubble with no real value, while others claimed it was revolutionary and a transformative economic technological innovation. It is reasonable for people to disagree on the merits, usefulness and future outcome of Bitcoin. However, if the Bitcoin network is as transformative as some believe then there could be huge potential for locations that are favorable to the Bitcoin industry to prosper – most notably right here in Montana. Montana is already attractive to mining facilities due to the price of electricity and the cold temperatures. Coupled with the ongoing economic growth in the high-tech sector, strong system of universities and colleges capable of training a workforce of high-tech laborers and entrepreneurs and high quality of life, the bigger picture is highly appealing to the industry - making Bitcoin a potential source of economic and job growth moving forward for the state. [Montana Business Quarterly]

Part-time Butte residents and Silicon Valley veterans Mike Williams and May Huang are working to establish a pilot project for a coding immersion program in Butte called Montana Powered. The couple hopes to launch their pilot project in the former convent of Butte's Immaculate Conception Church to test the feasibility of the immersion program for seven months before moving the operations to another site in Butte if the program is successful. The pilot project is currently pending approval from the county’s Zoning Board of Adjustment given the convent is in a residential area. Montana Powered is an effort they hope can attract and retain young professionals in the Mining City by presenting them with a gateway into the tech field. Students will learn an array of  “DevOps” skills and be prepared to take exams for four professional certifications upon completion of the program. Additionally, students who complete the program have the option to work for Montana Powered when they graduate as part of the company’s mission is to provide professional Montana jobs where people can afford to live. [Montana Standard]

Business is booming for Braves Ink, a student-run print service at private school on Montana reservation in Ashland, Montana

Between studying for exams and applying to college, a small class of students at St. Labre Indian Catholic High School in Ashland, Montana, are running their own business, Braves Ink. The company, which designs and prints shirts for its clients, is nearly entirely student run and has been commissioned to design and print shirts for everything from athletic teams to memorial shirts recognizing lost loved ones. The program, which had humble beginnings with limited technology and supplies, now operates with high-quality equipment thanks to a grant from Montana Congressman Greg Gianforte, training from Snappy Duds, an embroidering and printing company, and profits from their sales. The profits earned through Braves Ink are paid out to student employees at the end of the year in the form of college scholarships. A client of Braves Ink and instructor and coach for the Little Braves basketball team, Sidney Fox, said he plans to continue doing business with Braves Ink because they not only produce quality work, but their work in the program will help them be successful later in life. [KTVQ]

Facebook will make a stop in Helena as part of an initiative to boost local businesses by providing training in digital marketing and social media skills. Facebook founder Mark Zuckerberg announced last fall that Facebook would increase its efforts to support small businesses through a project called Community Boost. Helena was chosen in part after Facebook conducted a study that found 39 percent of small businesses in Helena saw Facebook as an essential tool, and 37 percent said it’s helped them have the means to hire additional employees. The dates and event details for Helena have not yet been announced, but the company will offer free workshops, business training and networking with a goal to reach more potential customers and improve digital presence. The project also plans to visit cities Minneapolis, Phoenix and Denver in the coming months. [Independent Record]