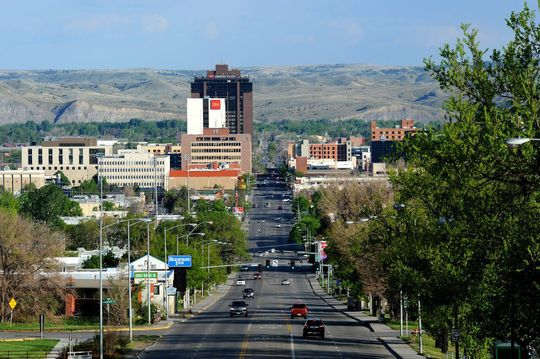 The tech boom has diffused beyond the traditional hotbeds of California, New York, and Massachusetts, across the entire United States. Based on the latest CBInsights map of the most well-funded American tech startup (based on disclosed equity funding) in each state, Missoula-based Submittable tops the chart for Montana with $17.9M of disclosed funding. Investors include Montana-based Next Frontier Capital and Silicon Valley-based True Ventures. The company is also currently hiring for several positions, too, including two summer fellowships opportunities. [CBInsights]

The Montana Chamber of Commerce recently launched a 10-year strategic plan for Montana called Envision 2026. The plan is guided by four primary goals — workforce, entrepreneurship, business and infrastructure - and will use key metrics to guide and measure its progress. The article also mentions that over the final quarter of 2017, more than 1,400 Montana jobs were added across the state. While 2017 was a notable year in many respects for Montana, the Montana Chamber of Commerce says it is “looking forward to a great 2018.” [Missoulian]

Companies Montana Precision Products, UDAP and The Peak talk about company growth and the pros of doing business in Butte

Outdoors-oriented businesses and high-tech manufacturers play vital roles in southwest Montana’s economy. During recent interviews, three businesses shared why they embraced Butte-Silverbow County as a place to do business. Chris Eurich, General Manager for Montana Precision Products, a high-tech aerospace and industrial parts manufacturer, commented on the company’s recent growth - sharing that the company plans to add upwards of 60 Montana jobs in the next two years. According to Eurich, approximately 85 percent of the parts Montana Precision Products manufactures are for GE, and the demand for the product used in GE’s LEAP jet engines has significantly increased due to extreme reliability and efficiency of the products. UDAP, which is most well known for its bear spray but also offers personal pepper sprays, spray holsters, stun guns and bear resistant bins, moved its headquarters to Butte in 2008. UDAP’s general manager, Tim Lynch, 43, has been with UDAP since 2001. He said Matheny, the company’s owner and president, had several reasons for moving the business to Butte. “He was wanting to get the business away from his house,” Lynch said. “At the same time, I was looking at moving back to Butte.” Lynch and his wife, Amy Bone Lynch, are Butte natives and wanted to come home to raise a family. Lynch said property prices were attractive in Butte, that the region’s reputation for employees with a strong work ethic was a draw and that the proximity of Interstate 15 and Interstate 90 has been very positive for UDAP in regards to shipping rates. Also interviewed was Rod Alne, founder of The Peak - which provide first-class survival training and education. The Peak’s catalog of services includes backcountry training, wilderness survival, climbing and rope rescue, swiftwater rescue and wilderness medicine, among many other things. Rod, with a military background, shared the interesting backstory behind launching the company and more about the growth and development of The Peak. [Montana Standard]

For 17 years, Bozeman-based Zoot Enterprises has been providing funding to local nonprofits through quarterly donations to formal grant applicants, in addition to donations through an employee matching program. In that time, the company has supported more than 300 organizations with more than $400,000 in donations. 2017 was no exception as Zoot Enterprises supported 70+ organizations, including Manhattan FIRST Robotics Club, Children’s Museum of Bozeman and Warriors and Quiet Waters. For those less familiar with Zoot Enterprises, the company is a leader in the fintech industry (and headquartered in Bozeman). It provides a “cloud-based secure processing environment that delivers millisecond real-time decisions, accessing hundreds of cutting edge data sources to help reduce risk and increase conversions.” It’s international client base includes major financial institutions, retailers and payment providers. It's also worth noting that Zoot is currently hiring for several Bozeman-based positions. [Zoot Enterprises]

From craft alcoholic beverage production to ammunition assembly to churning out prefinished house siding, manufacturing businesses in Missoula (and across the entire state) are diverse and growing. “Every manufacturer that I know of is hiring or growing,” said Shane Cantrell, a business adviser for the Montana State University’s Manufacturing Extension Center. “I don’t know of any that are cutting back. Everyone is talking about hiring 5-10 people in the next 2-3 years or expanding their facilities or purchasing new equipment or adding automation.” Additionally, according to a recent report from the Bureau of Business and Economic Research at the University of Montana, manufacturing employment has grown much faster in Montana than the U.S. overall. Montana manufacturing employment increased from 19,841 jobs in 2010 to 23,896 jobs in 2016, a jump of 20.4 percent. The national increase in manufacturing jobs was 8.3 percent in the same timeframe. While all manufacturing sectors are seeing growth, the two sectors with the most significant employment growth were fabricated metals, which added more than 1,200 Montana jobs (65 percent growth) and alcoholic beverage producers that added 580 Montana jobs (75 percent growth). [Missoulian]

The Bozeman-based COMMIT Foundation recently announced it was awarded a multi-year gift from the A. James & Alice B. Clark Foundation. COMMIT, whose mission is to serve exceptional American servicemembers as they transition out of uniform to pursue personal and professional purpose, said the investment will allow the company to expand services and more deeply impact their program participants by increasing its number of Transition Workshops, partner with like-minded Veteran Service Organizations to empower local ecosystems and invest in technology solutions to bring COMMIT’s effective programs to a broader audience. The foundation is also currently hiring, too! [COMMIT]

The Montana Carpenters’ Joint Apprenticeship Training Center in Helena shared its recently competed facelift with the public last week. The training center hosts a four-year apprenticeship program to become journeymen carpenters. Apprentices are able to learn their trade while working under the supervision of experienced carpenters and earning a salary. The program currently has 39 apprentices enrolled, but leaders of the program said they’d like to see the number grow. According to a 2017 report from the Montana Department of Labor and Industries, construction is the state’s fastest-growing industry and is projected to increase 2.7 percent annually - creating 815 Montana jobs each year. [3KRTV.com]

Montana payroll employment growth is second best in the nation

According to Montana’s Senior Economist Barbara Wagner, Montana’s payroll employment growth in December 2017 was the second fastest in the United States. She also noted that the State’s unemployment rate continues to hover around 4%. [Newstalk KGVO]