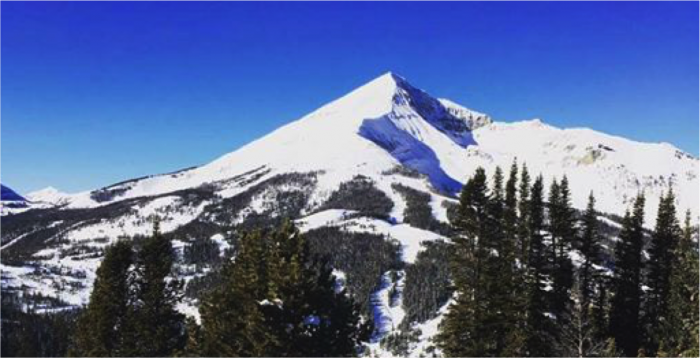 So. Much. Snow. And, in full disclosure, all this fresh powder has us sneaking out for a few turns today. Of course, not until after this week's skim of Montana business news is wrapped up and ready for you! Continue below for this week's skim.

News of the call center FCR (hiring) opening in the Butte Plaza Mall was warmly welcomed by mall employees after several large retailers closed over the past couple of years. FCR is a premier provider of U.S.-based call center outsourcing solutions and business process outsourcing. The company is based in Oregon but has another Montana location Great Falls. The site in Butte will be a call outsourcing center that will provide callers with information via telephone, text message or social media. The center is expected to bring about 350 new Montana jobs to Butte and is slated to open this spring. Butte Plaza Mall on-site manager Alana Ferko said she is excited for what this business will bring to the mall. "When you have a couple additional 300 people on site, you're definitely going to see an increase in traffic," she said. "People are going to come out at break time. Since the plan was announced on Monday, Ferko said she's had two new business inquires. [ABCFox Montana]

Entrepreneurs and small business owners in Gallatin County can now get business mentoring at the Bozeman Public Library at no cost. The city is partnering with the Blackstone Launchpad and Small Business Development Center at Montana State University to open a new business center at the library. People can expect 20-minute, one-on-one sessions where they can seek advice or be directed to resources in the community. Weekly sessions begin in January on Tuesdays from 1-3pm. Sign up for an appointment online at the library's business center page. [NBC Montana]

Since 2012, 89 innovative recipients have been awarded business grants totaling $100,000 by the Red Ants Pants Foundation of White Sulphur Springs. According to Red Ants Pants Foundation executive director and visionary, Sara Calhoun, “The grant program is not an incubator for business, but it’s for leadership on the ground.” Specifically, the foundation supports women’s leadership, working family farms, ranches and rural communities. Empowering small-business owners and vital, ground-breaking initiatives is in the foundation’s wheelhouse. Prime examples are Dropstone Outfitting, a hiking-based business, which won a $4,190 grant in 2017. Another is the Garfield County Fire Foundation, a $5,000 grant recipient in 2018, making possible the creation of an internet fire safety program for teens and the community at large. Ticket sales from the wildly popular Red Ants Pants Music Festival comprise the entire $100,000 grant program. Donations also figure into the mix. A list of all grant recipients from 2012 to 2018 can be found here. [Missoula Current]

Iowa-based Workiva (NYSE:WK), which has offices in Bozeman (and is hiring), was recently named one of the 2019 Best Workplaces in Technology by Great Place to Work® and Fortune Magazine. To determine the Best Workplaces in Technology, Great Place to Work® analyzed responses from more than 220,000 employees in the technology industry at Great Place to Work-CertifiedTM organizations. Employees anonymously rated their employers on more than 60 surveyed criteria. Workiva ranked 19 on the list of 25 large technology companies. This is the third time Workiva has been named to the Best Workplaces in Technology list. “Workiva is proud to be in this prestigious group, which includes some of the most successful technology companies in the world,” said Marty Vanderploeg, Chief Executive Officer of Workiva. “We give our employees the freedom and resources they need, and together we are transforming an industry and improving the lives of our global customers, employees and investors.” [Business Wire]

Growing rapidly, Bozeman Yellowstone International set a passenger record in 2018 for the ninth consecutive year. The airport handled 1,340,857 passengers last year, an 11.8 percent increase from the year before. Annual passengers have almost doubled in the past 10 years and account for about 30 percent of all airline passengers coming in and out of Montana. During 2018, the airport expanded its year-round offerings to include daily, nonstop flights to Portland, San Francisco and Los Angeles. Flights to Denver and Phoenix/Mesa also became year-round flights, and the airport started offering a number of seasonal daily flights. Additionally, the airport also reconstructed its runway, began construction on a new parking garage slated to open in June, and began work on a four-gate terminal concourse expansion. [Bozeman Daily Chronicle]

Montana’s farthest-reaching phone cooperative is getting into the cloud storage business with its recent purchase of a Billings data firm, Parsec Data Management. Parsec Data Management is full service Tier 3 qualified commercial data center located in the Transtech Center campus in Billings. Nemont Telephone Cooperative (hiring engineering and customer success positions) in December acquired Parsec Data Management, a move that sets up the Scobey-based cooperative to offer off-site data storage for large customers like banks and eventually cloud storage for small internet customers. Nemont is the farthest-reaching Internet service provider that most people haven’t heard of. The cooperative made news several years ago when tiny Scobey, in the northern corner of the state, was identified as having the fastest Internet speeds in Montana. Over the years, the co-op has expanded into areas unserved or underserved by larger phone and Internet providers. Nemont’s reach stretches to Huntley and Absarokee, as well as northern Wyoming. The cooperative has 22,000 phone line customers and 14,000 Internet customers. [Billings Gazette]

Frontier Airlines returning to Billings, will resume flights to Denver

Frontier Airlines is returning to Billings Logan International Airport and will begin flying nonstop to Denver "starting as low as $39 each way," the airline announced this week. Frontier is expected to begin service in Billings May 30, said Frontier's Jonathon Nield, a senior manager of route planning for the airline. Flights will be on Tuesdays, Thursdays and Sundays. [Montana Standard]

The Governor's Office of Indian Affairs and the Montana Department of Transportation – Small Business Program are collaborating on a three-day conference to help small businesses interested in “Takin’ Care of Business” at the Tribal Relations Training and Small Business Summit on Feb. 12-14 in Helena. This is an opportunity for all Montana small businesses to learn about everything from business branding to marketing and from cyber security to human resources. On the first day, attendees will receive tribal relations training during which they can experience and learn about Montana's Tribal Nations and become a Partner in Building a Stronger Montana. The training includes topics on How to Conduct Business in Indian Country and keynote speakers on entrepreneurship and government relations. The following two days will be full of inspiration and information. The fee for the tribal relations seminar on Feb. 12 is $75. The fee for the two days of small business seminars is $75. [Helena Independent Record]

Entrepreneurship in Montana (by the numbers)

Montana has a strong entrepreneurial spirit. The state has more entrepreneurs per capita than any other state and a business survival rate (businesses that survive beyond their first five years) that ranks in the top 10. Some 3,400 Montanans start a new business each month, and more than half of those startups are still open five years later. To put it simply, Montana is among the nation’s leaders in entrepreneurship. A recent study on entrepreneurship by the Bureau of Business and Economic Research at the University of Montana found some positive signs of success, as well as some weaknesses in what would seem to be a robust entrepreneurial ecosystem. Indicators of success pointed to the fact that Montana creates a high rate of entrepreneurs and many are successful. However, the study also indicated that Montana businesses tend to be small and scale more slowly. Overall, the state of entrepreneurship in Montana is a mixed bag. Recent growth in access to venture capital and business support services suggests that Montana may be on the verge of developing more high growth startups. But getting Montana’s entrepreneurs to succeed in creating high-growth firms with high wage jobs will not be easy. [Montana Business Quarterly]

S&K Technologies Inc. is a family of five subsidiary companies that support federal and commercial customers. Thursday, the company announced that it had acquired Arizona-based International Towers. S&K Technologies CEO Chad Cottet said in a news release that the acquisition of International Towers opens up new opportunities for the company in the cellular and broadband communications space, tower and broadcast infrastructure, and security markets. International Towers will keep its name and operate as a subsidiary of S&K, with plans to enter the Small Business Administration’s 8(a) development program - a program that assists small businesses whose owners are disadvantaged, S&K said. S&K operates four businesses under its name, offering aerospace maintenance, engineering services, logistics and aircraft sustainment. It also owns Adelos Inc., a Montana company specializing in fiber-optic sensor systems. The company, owned by the Confederated Salish and Kootenai Tribes, is hiring a payroll specialist in St. Ignatius, Montana and a bid and pricing analyst who can work from remote from anywhere. [Arizona Daily Star]

The Montana Department of Commerce announced on January 17 that $320,000 in grant funds will be awarded through the Indian Equity Fund Small Business Grant to support the growth of 28 Native American-owned businesses across Montana. “The entrepreneurial spirit is strong in Indian Country,” said Jenny Pelej, division administrator for the Montana Office of Tourism and Business Development at Commerce. “As Native American small business owners look toward growth, Commerce is here to help them take the next step.” A full list of recipients can be found here. [Montana Department of Commerce]

WinCo is nearing completion of its 84,000-square-foot grocery store in Helena, and Montana job openings have been posted for about 160 employees to fill roles ranging from cashier to deli clerk to cart clerk. Different than most grocery stores, WinCo is owned by its employees, meaning every single employee has a stake in the company.  According to WinCo spokesperson Noah Fleisher, “From the people pushing the carts, to the CEO, and everyone in-between, it makes a huge difference when you walk into a store and it makes a huge difference in how you treat customers and view world-class customer service, which we are absolutely known for. This pride of service comes straight from employee-ownership.” As an owner, each employee gets an annual stock gift based on what they make. After six years, an employee is fully vested. The grocery store is holding a hiring event Jan. 28-30 at Job Service Helena. [Helena Independent Record]

Last week, members of Dover, Kohl & Partners summarized the results of their public outreach campaign, one that saw residents attend workshops and offer input on the future of downtown Missoula. A more diversified transportation grid in the downtown district is most certainly in the future as are taller buildings, “big” public art, more Missoula jobs and more housing. The interest in the district’s future is admittedly high and it comes as the old Downtown Master Plan prepares to sunset. More than 80 percent of the items envisioned in the 2009 plan have come to fruition, including public parking, more downtown lodging and $850 million worth of investment. With Missoula poised for growth, a new plan is needed to continue guiding the district’s evolution. As presented, it includes a focus on housing and retail, better connectivity, parking, urban infill, jobs and public transit. [Missoula Current]